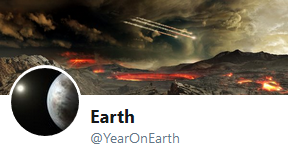 At midnight on the 31st of December 2017, I started a little project for the year:

Following a shockwave from a nearby supernova, a cloud of interstellar gas began to collapse into a young T Tauri type star.
As the star grew, its gravity drew in more gas and dust. As the gas and dust got denser, a process of runaway accretion began, forming primitive planets

The aim of @YearOnEarth is to live tweet the entirety of the geological history of the earth compressed into the year of 2018.
4.54 billion years - in 365 days.
Earth's history is unimaginably vast but by telling the story in this medium, I hope to give some context to our planet's past.

This period is informally referred to as the 'cryptic era'. Very little geological evidence exists of this time.
The earth looks very different right now. The planet is hot. The sparse crust is weak and thin. Impacts constantly pummel the surface, recycling any rocks that form.

Even with history passing at this rate, it will still be a long time before anything that most of us are familiar with will happen. You'll have your 2018 advent calendar up before dinosaurs walk the earth! However, the history of the early earth is still fascinating, and I hope to tell as much of its story as is known.

Finally, it's very important I point out that I am no expert in earth history, just an enthusiastic amateur geology graduate. Any comments, corrections or tips are greatly appreciated.
You can direct message @YearOnEarth on Twitter, or email me directly at:
[email protected]

12 points from Sweden go to the AI

Why Pride Matters - or at least, why it matters to me

On Saturday, I visited Brighton for Pride. I went there with my employer and the

January - Month in Review and the Jack Hills Zircons

What a month it has been for our young planet earth. In our timeline just